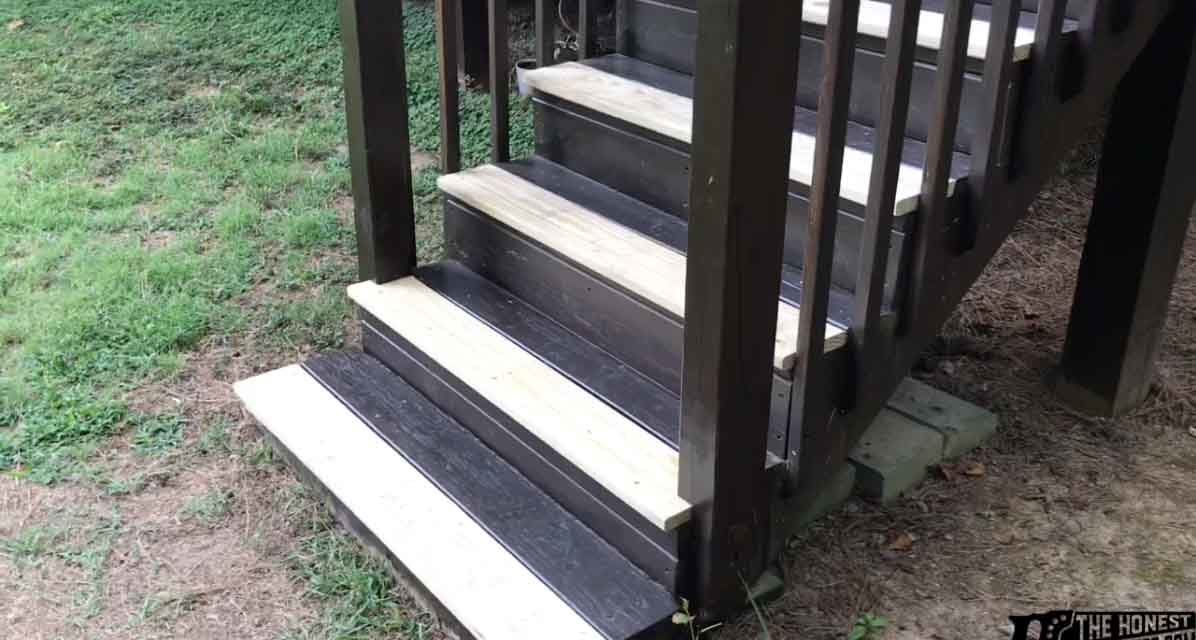 Deck stair treads–especially FRONT deck stair treads–are prone to coming loose, detaching, and even breaking. This article and video from The Honest Carpenter will show you how to replace individual deck stair treads. It will also give you great tip on how to make deck treads stronger in the future!

(The lists below contain some affiliate links.)

Pry Bar–all the leverage you need! Deck stair treads are a big problem area on decks, and one that poses a real safety concern.

This is because on most decks, the front tread often overhangs the riser below. Deck lumber dries out, nails loosen up, and the action of feet hitting the edge pries these boards up like a seesaw. Weight can even cause boards to split along grain lines and just break at the front edge.

(The back tread often lasts a lot longer because it’s better supported. But, the tips for this repair apply just as well to the back tread if it’s showing wear and tear.) The most important thing about replacing deck stair treads is to do it very carefully. I start by very gently trying to pry up the board with a large screwdriver. I don’t use too much force.

If a board is down really tight, I sometimes use that same screwdriver, and a hammer, to break the board into pieces. I drive the screwdriver in right beside the nail heads. This forces the woodgrain around nail heads to split, so the nails have nothing to hold onto, and I can pull the board out in pieces.

Here’s the reason why I do it this way: the stair stringer—the structural piece below—is actually very weak in places. It’s shaped like a sawtooth, and that grain runs diagonally across the teeth of this saw. Those diagonal lines are places where the stair can EASILY fracture, so you want to avoid breaking them.

Don’t hit them sideways, and don’t force too much leverage down on them. That’s why I stubborn deck boards. If board needs just a little extra force, I will sometimes use a pry bar, but I do it as slowly as possible.

Once the lumber is up, I carefully pry out nails with a nail puller if they will come. But, if they don’t want to pry out, they can also be driven all the way in with a hammer.

I go through process this for all the treads I’m replacing, and I also clean out any gunk that has collected around the boards. I use a five-in-one to carve out this stuff. I use a circular saw to make my cuts. But first, I want to square up the end of the board to make sure that it’s clean and straight. I do this by using a speed square as a guide for my saw. I just clamp the speed square in place with my hand, then guide the edge of the sole plate against it. Now I can pull a measurement from this square end and make a crows foot mark where I want it. I use my speed square and pencil to make a straight line at this point.

(Keep in mind that I’m using piece of 2x scrap as a prop block to make these cuts. This keeps my saw up off the ground, and creates a little leverage so the board can fall away after the cut, preventing blade binding.)

Once again using the speed square as guide, I line up the outside of the blade tooth with the plot line, and make my cut.

I cut all of my replacement pieces at once and set them in place on the stair stringers to check their fit. Everything looks good, so I’m going to attach them. But, I like to take some extra precautions to prevent same old problems from happening again. Basically, when replacing these front treads, I like to use a combination of screws and adhesive, and here’s why.

Notice how the tops of the stringers show these cracks. This is a natural result of fasteners splitting the end grain. If I were to attach straight back in with fasteners, they would probably enlarge these cracks, and they might not even grip anything.

So, I like to apply a small bead of adhesive to the stringer tops. Just enough for the next tread to mush down into it. I’m using PL Premium Loctite, a very strong adhesive, that bonds quickly.

Adding adhesive does make this repair more or less permanent. But, it seems highly unlikely to me that these stringers would survive a second repair. So, I don’t mind making these treads permanent, because I think any future repairs would involve full stinger replacement.

With a little glue in place, I push the board down into the bead, and leave a small 1/8” gap between the two boards. For fasteners, I always use screws. They hold much tighter than nails. These are 2-1/2” exterior grade screws. I use an 1/8” bit to pre-drill pilot holes, lining them up with the center of the stringer. I then use an impact driver to drive a screw in, and countersink it so the head is recessed just a little bit.

I do that for each stringer. But, for the front of the board, I often don’t trust the stringer there because the wood grain is so sketchy. So, instead, I like to carefully put a screw down into the riser. I just line it up by eye, pre-drill, and send a screw in the same way. I repeat the process for the other steps. I want to bring up one other tip that I think is really important. Down on the bottom step, the tread overhang is more than an inch, and that’s just too much. I feel like it’s almost guaranteed to break.

So, sometimes what I do in this situation is add a little ledger strip beneath it. I use an old dog-ear picket left over from another project. These are 5/8” thick, which is just right.

I set my table saw at a 45 degree angle, and rip about half of this board down. I cut it to the length of the bottom step with my circular saw. Then, I run adhesive on the back and top, and mush it into place beneath the overhang of the step, and I shoot it with several 2” brad nails.

When this dries up, it will give a little extra support to that tread, and I can pretty much ensure that it won’t break or detach over time. In a few weeks, the new treads will be ready for stain and weather seal.

That’s how you replace deck stair treads. Thanks for reading the article and watching the video! If you have any questions, please ask them down below in the comments section of our YouTube channel. HOW TO SPOT QUALITY TRIM WORK HOW TO REPLACE PORCH COLUMNS