Q: I recently had a contractor provide an estimate for putting down a vapor barrier in my crawlspace. While he was down there, he said he found several places where plumbers had badly damaged the floor framing, and that it needed to be repaired. Should I believe him? –Ashlynn K., Clayton, NC

A: Hi Ashlynn, I would ask the contractor if he could provide pictures of the damage, preferably with adequate lighting. It’s entirely possible he’s being sincere; I have seen this happen in numerous instances over the years.

Plumbers installing supply and drain lines in new houses rarely do anything to compromise house framing. If they do, the inspection process will generally pick it up before the house is put on the market.

However, in older houses where one or more remodels or repairs have occurred, the odds that plumbers or HVAC installers have damaged framing can go up drastically. Plumbers need to situate pipes and supply lines at very precise angles, and in very particular places. GOOD PLUMBERS will always take precautions that their lines penetrate the floor in areas free of framing, and that their traversing angles begin below the joist level. If necessary, they will even insist that framing changes be made to allow for clearance.

However, BAD PLUMBERS will sometimes install pipes wherever it is easiest or most convenient. (In the top picture, they have bored straight down through a joist so they can run their supply line directly to a sink or spigot. In the process, they have removed nearly all of the joist’s structural integrity, and created a condensation-rot situation!)

An even more frequent problem is “notching.” If plumbers need a pipe to traverse the crawl space at a certain height, they will sometimes just notch a chunk out of the bottom of a joist to allow for clearance. (Pardon the quality of the picture below–it was taken from the prone position in a nightmarishly small space.)

This is almost as bad as the vertical bore, because cutting through the underside of a joist drastically reduces its “span” strength–the amount of load it can carry over a specific distance. (Here’s a really comprehensive link for the informational span tables of southern pine–an extremely common framing material.)

The proper way to handle this situation is to pass the pipe through a hole in the center (mid-point) of the joist, where the  material around it on all sides can easily compensate for the missing portion.

However, feeding pipe through a series of these holes in a tight space can often be logistically impossible, so plumbers will take the structurally dangerous route of notching joists instead.

If you have notched joists in your crawlspace, the problem can be mitigated by “sistering” compromised framing members–in other words, attaching a companion piece over the notch to help carry load. The process really isn’t that complicated most of the time, and it will greatly increase the strength of your floor system. A high volume of fasteners shot or driven in a continuous “W” pattern ties the new component to the old one.

Also, carpenters can occasionally shorten and bridge framing members to allow for drain line penetrations. Here’s a good animated video tutorial on how that is done…

Again, I would ask the contractor for pictures of your particular scenario. If you see places where framing has been notched or bored in irresponsible ways for pipe clearance, you may indeed have necessary structural repairs on your hands.

Honest Carpenter Consulting is proud to be an early provider for home consultation services. If you’re in need of home advice, or just want to know more about our business, simply click the link below! HOW TO REPAIR LEANING FENCES 5 WAYS TO FIND STUDS IN A FINISHED WALL 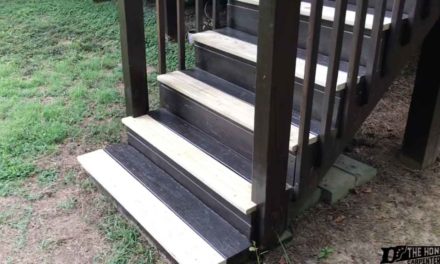